YORK MAZE: Family Day-out with rides, challenges and lots of playing in Yorkshire

We enjoy going to lots of family-friendly attractions and over the years they have all gotten bigger, better and slicker. Itâ€™s great to see the rise of super-farms and businesses booming but sometimes everything feels a bit â€˜tooâ€™ comfortable for the kids. Thereâ€™s not a lot of exploratory play. Itâ€™s just handed to them on a plate (or screen).

Donâ€™t get me wrong thereâ€™s nothing I love more than being indoors, cosy and with a good cup of coffee. But itâ€™s important to let kids be kids and thatâ€™s what York Maze does right.

After chatting to York Maze online, we were invited to go review the place. Iâ€™ll be honest, I had never heard of the Yorkshire attraction, so I was excited to give it a try this half-term.

We had a great time reviewing @Yorkmaze @YMHallowscream with the real huge pumpkin! It’s a great day out for the kids with lots of physical activity, playing & exploring – Have you been? What did you think? @MamaMeiBlog @YorkshireTots @tripswithatot @daysoutuk @HarrogateMama pic.twitter.com/QQTmXHQACL

As we went the day after Halloween, it was all Halloween themed but hopefully this review will help you regardless of what season you visit the maze. 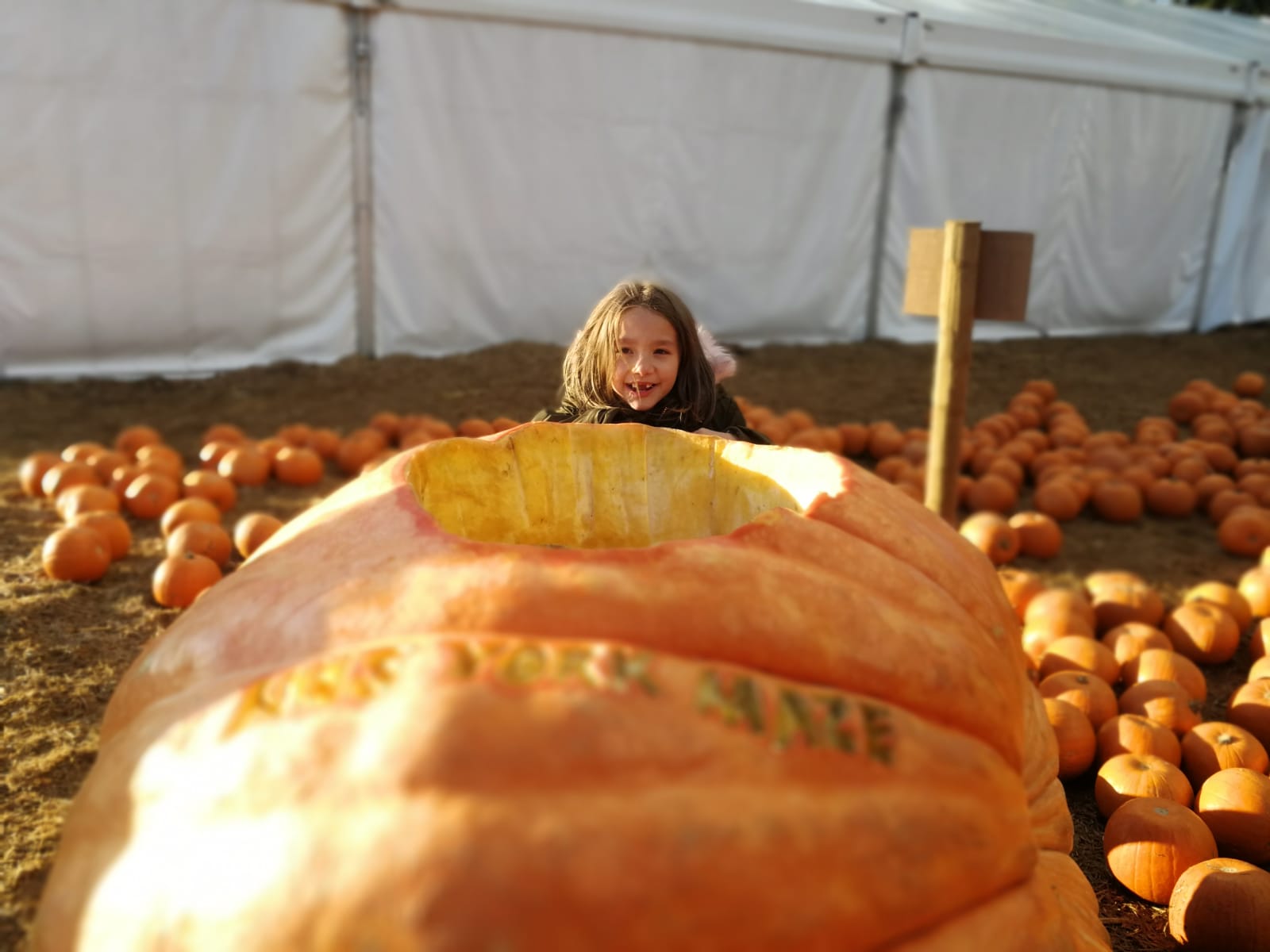 Once we had entered through the wooden building we were immersed in smoke to start off our Halloween adventure.

When we had passed the smoke machines, we were then into the ranch-style courtyard where there’s a cafe, toilets, wooden play area and even a pumpkin slingshot. (I imagine it’s themed differently depending what season you visit). 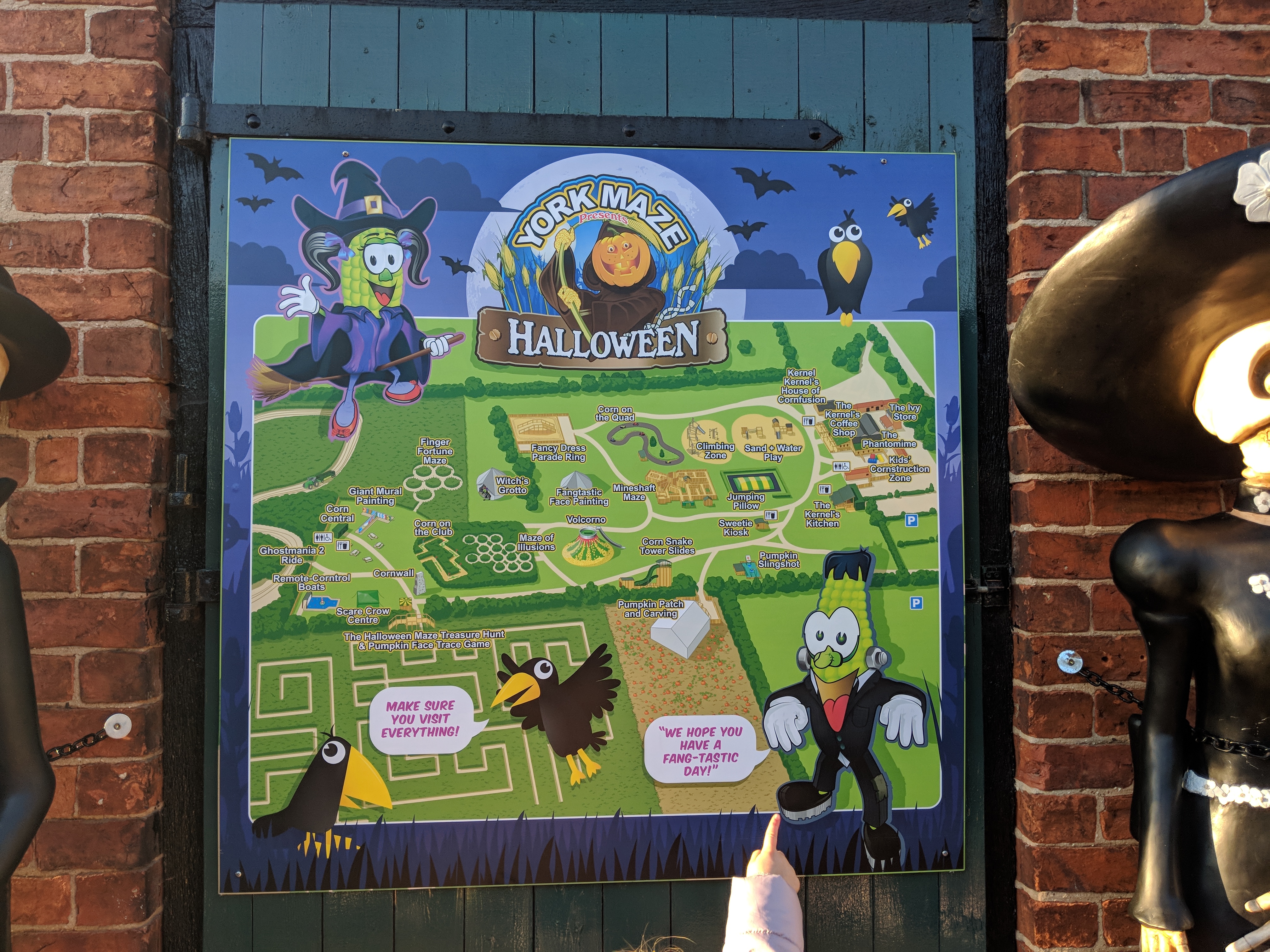 We popped in first to a mini Halloween panto, set inside a barn. 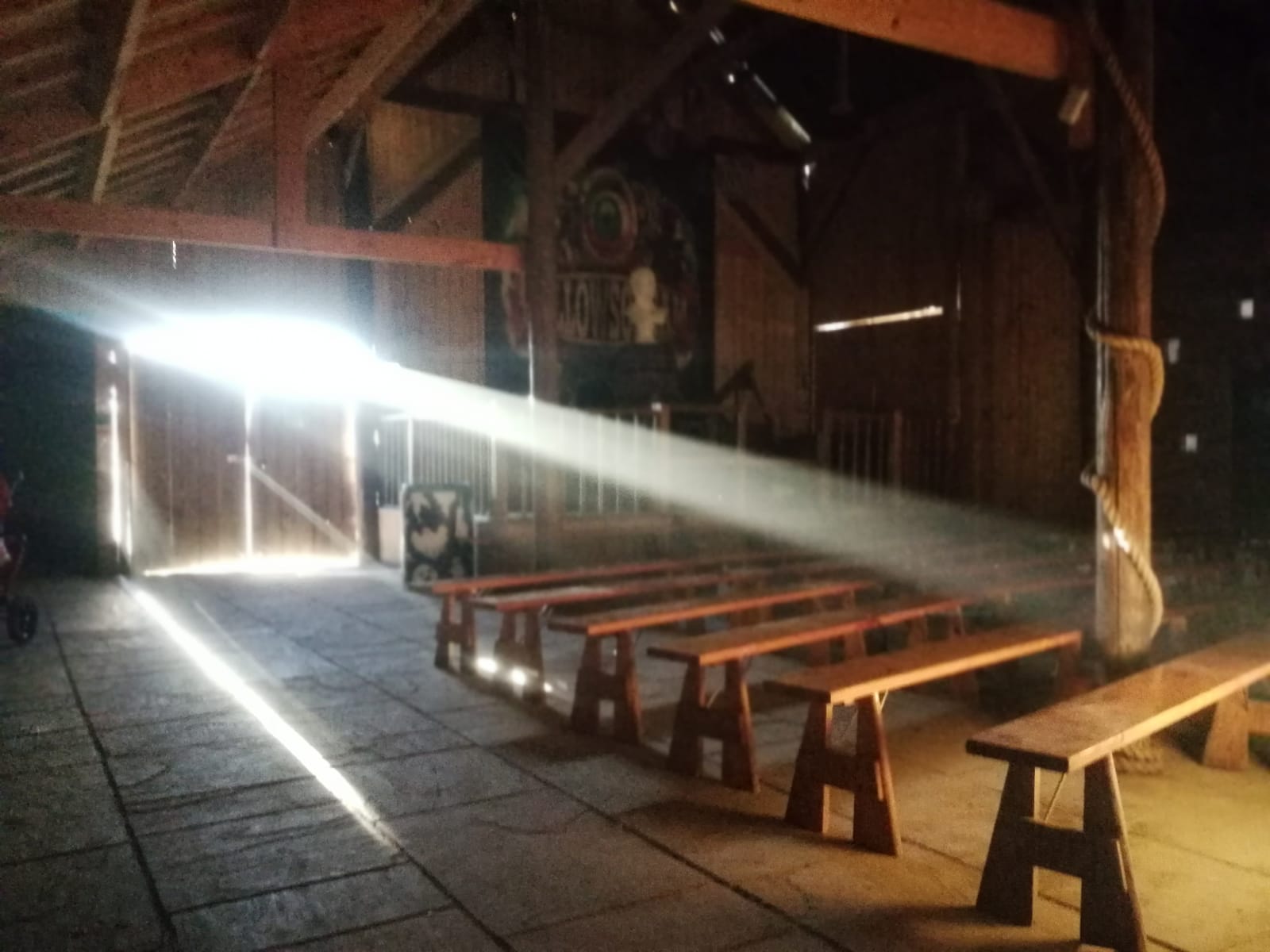 Then we spotted the sign for Pumpkin Carving and went that way as we weren’t sure how to get into the maze (yes we’re that bad at directions- we that we had gotten lost before we even got to the maze).

Inside the tent you could do pumpkin carving, there was a mini pumpkin show as well as the chance to watch a professional carving a pumpkin.

Out of the back of the tent was a mini field of pumpkins, including the largest real pumpkin I have ever seen! (In fact Farmer Tom from York Maze sailed down the River Ouse in that Pumpkin! Youâ€™ve got to love the Yorkshire spirit!).

After some photos with the pumpkins and the opportunity to pick our own, we decided to head for the maze after we had worked out that you go along a little path to the entrance.

As itâ€™s a farm the maze can be muddy and uneven, so wear wellies or walking shoes if possible. The children enjoyed finding each station where you can use a stencil to draw on your map. A-maze-ingly we didnâ€™t get too lost! But we had fun finding our way around and trying to keep up with the kids! The girls were chuffed to get their sticker on completion. 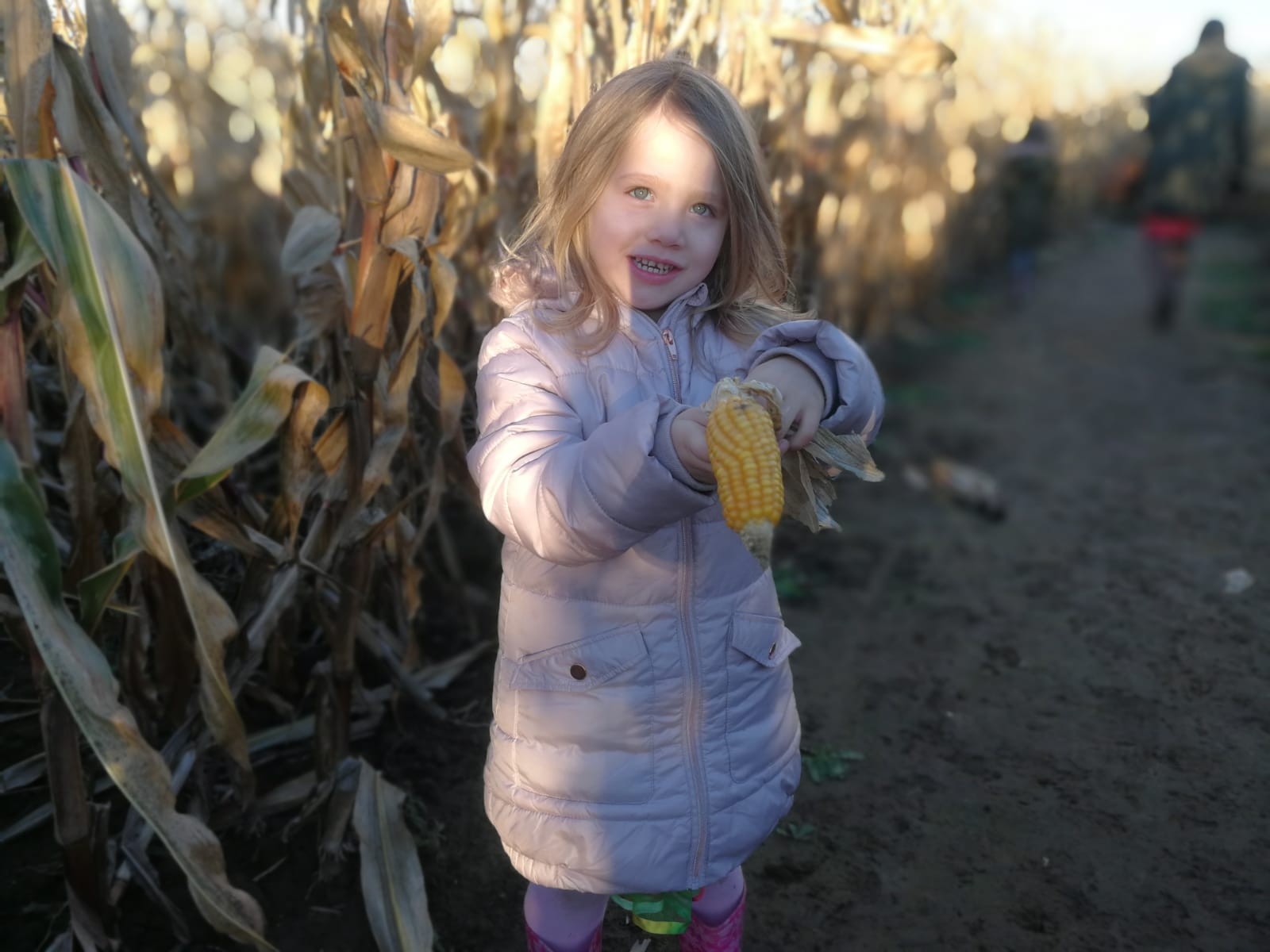 Next up, my daughters and I went on one of the high slides in a brown bag. There wasnâ€™t much of a queue so we managed to get on fairly quick. Â

It was really fun! We could have gone on a drop slide but the girls wanted to go on the slower â€œwavy one.â€

My mum then wanted a go on the Pumpkin slingshot where you sling pumpkin/balls and try and get them in baskets to win a badge (all free). So my mum and the girls had fun on that and luckily both daughters won a badge!

We had only given ourselves a few hours at York Maze but we quickly realised we could have spent most of the day there. We didnâ€™t get chance to go to the Scarecrow Centre, Painting Mural, Remote Control Boats, Witchâ€™s Grotto, Face Painting Â or Mini Mazes. As the girls wanted to go and bounce on the large pillow. We were lucky as there wasnâ€™t much of a queue to get on and the girls had a blast bouncing around. They then each selected their last activity. 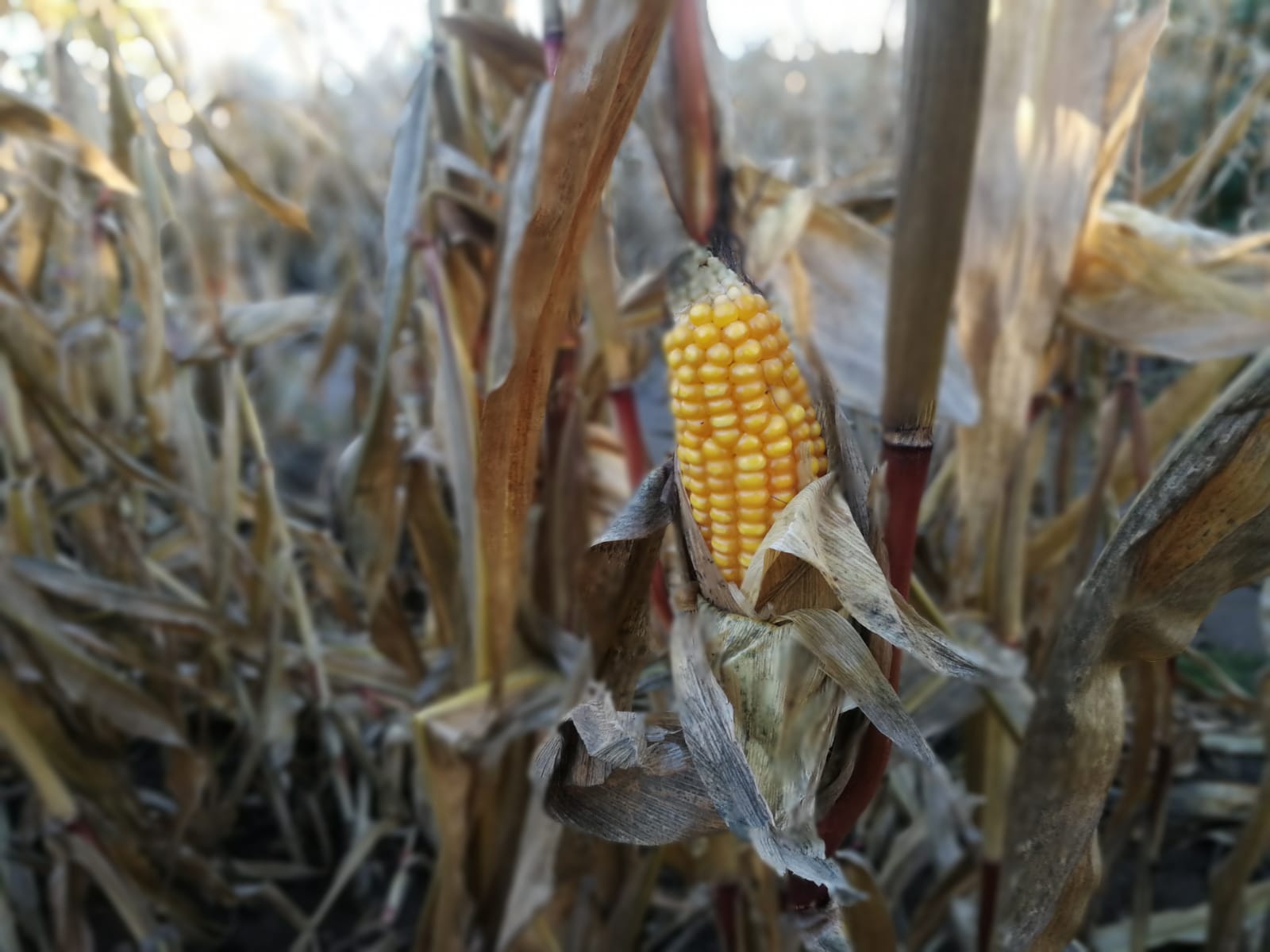 Avid climber Jasmine wanted to boulder up the Volcorno Slide and Arianna was a bit young for that, she went in the Climbing Zone and Sand & Water Play.

Itâ€™s great that the kids get to be so active and get a bit muddy tooâ€¦ How children should be!

As it was getting dark, we made our way out this time via the shop, The Ivy Store.

Before entering the car park, we bumped into the corn mascots which topped off a fun-filled afternoon for the kids. 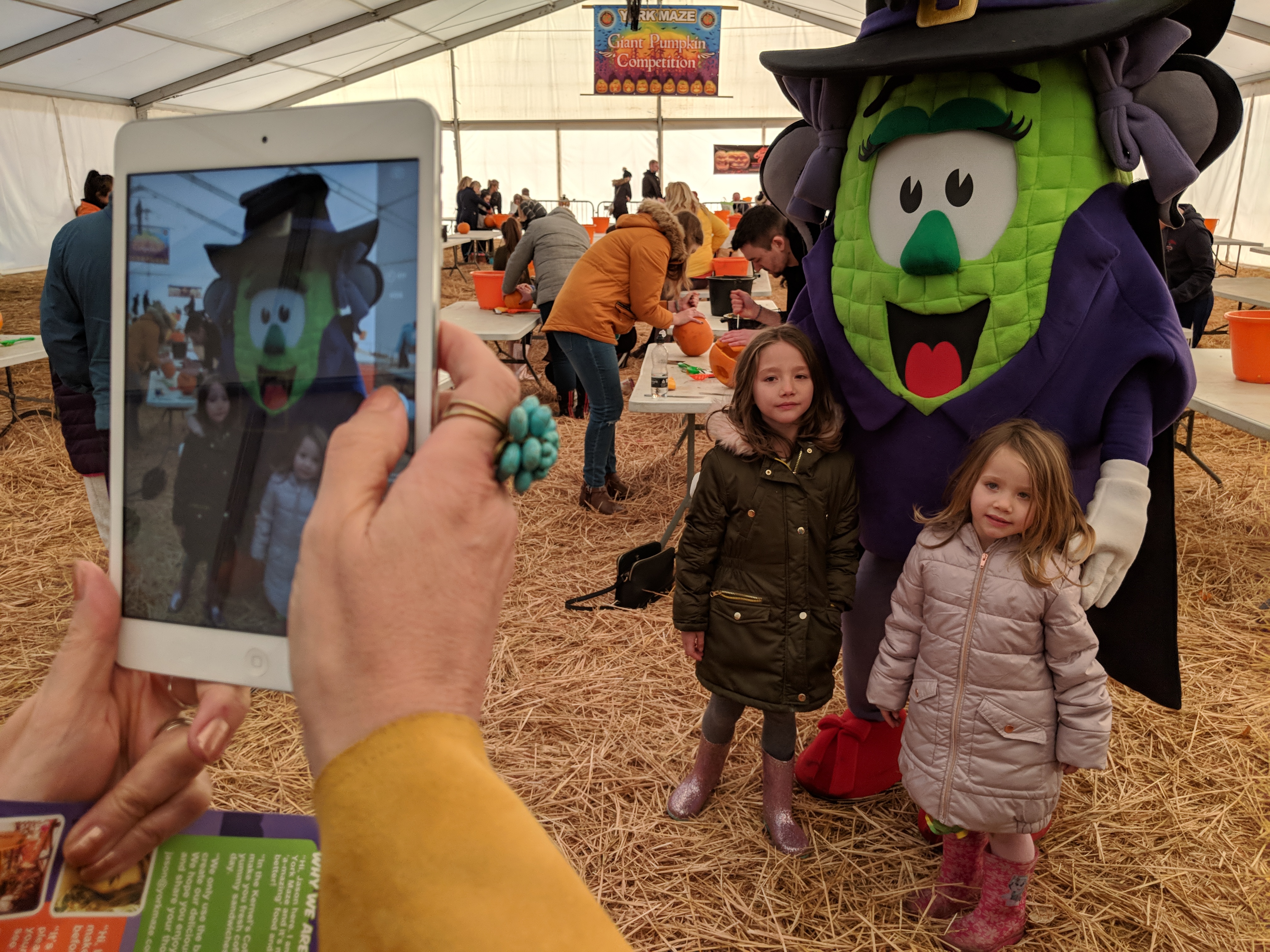