THEATRE REVIEW: How does TV Show Benidorm Live translate to the stage?

By Nicola Macmillan for via Blog Up North

Benidorm Live is the follow on from the hit TV show Benidorm. Set in the hotel Solana, the plot of the show is based around the lovable characters that people have come to know and love, when they hear that they are at risk of losing their jobs if they donâ€™t impress an undercover inspector. I wonâ€™t go into the plot too much because I donâ€™t want to ruin any surprises, but needless to say, hilarity ensues as they try to impress whoever the inspector might be.

I must say that going in to it, I wasnâ€™t 100% sure what to expect. I had no idea how well it would translate from screen to stage. I was definitely very pleasantly surprised by how well it all came together, and what an amazing show it was. It was well written, well acted, and from start to finish it was extremely funny. In fact it was so funny, that at times even that cast had a hard time keeping a straight face, especially during a small but spectacular wardrobe malfunction when one personâ€™s trousers just wouldnâ€™t stay closed.

The sets and costumes were absolutely perfect, and so in keeping with the show that it really helped to create the feeling of an amazingly, wonderfully, terrible hotel that you canâ€™t help but want to visit. The writing by Derren Litten was funny, dirty, and of course without it, none of the amazing actors would have been able to deliver such a funny and heartwarming show.

As fans of the programme will already know, it definitely isnâ€™t suitable for the whole family. Itâ€™s fairly racy, with some crass and extremely adult jokes, but honestly, they are what made it so funny. Itâ€™s unapologetic in itâ€™s humour, and I absolutely love that. It isnâ€™t high brow theatre, but it doesnâ€™t try to be. Itâ€™s a show for people who perhaps wouldnâ€™t usually consider going to the theatre. My mum has never been one to go see a play or a musical, but I would definitely take her to see this, because itâ€™s so funny and accessible, even if you didnâ€™t watch the TV show. 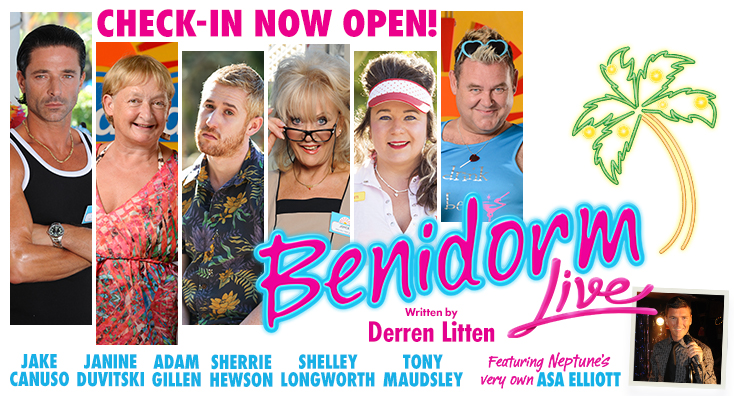 The entire cast was absolutely amazing, and Iâ€™ll go more into that in a moment, but I just want to take a second to mention my personal highlight of the show. That was the interactions between Kenneth, the flamboyant hairdresser played by Tony Maudsley, and Liam his assistant, played by Adam Gillen. Both of them played their roles perfectly, and the relationship between the two characters was equal parts hilarious and sweet. They have some touching moments interspersed between a whole host of comedy, and I found the pair to be such a joy to watch.

Another great pairing in the show was Janine Duvitski as Jacqueline, and her friend Gay Derek played by Damian Williams. An extremely unlikely pairing admittedly, but the characters were as similar as they were different, and they worked incredibly well together, creating some truly unforgettable moments. Some of the innuendo and saucy conversations between the pair, especially when theyâ€™re talking to unsuspecting holiday makers Ben and Sophie.

Tricia Adele-Turner and Bradley Clarkson played the accidental guests of the hotel, Sophie and Ben. They were absolutely amazing as the uptight wife and her potentially fun loving Husband who just doesnâ€™t really get to have fun. They are at the centre of the plot at times and do have some moments with all of the hotel staff members and other guests, which, were it a real hotel might give you pause, but in the show were a cause of some fantastic jokes at their expense.

One scene between Ben and and Jacqueline is particularly funny, and leads to even more laughs later on as a misunderstanding leads to the joke being very much at Sophieâ€™s expense.

Jake Canuso delivered in fine form as lothario Mateo. From seducing wives to flamenco, he was absolutely great, and no, Iâ€™m not just saying that because he was wearing budgie smugglers, although it certainly didnâ€™t hurt. Sam and Ricky were also great characters, played by Shelley Longsworth and Will Jennings, their parts were funny but understated in the first half; however by the second half they were definitely more in the limelight and they were both wonderful. As were the ensemble cast of Solana staff and holiday makers, dancing between scenes and singing with Asa in the musical numbers.

And of course last but by no means least, the wonderful Sherrie Newson as the slightly less wonderful (but extremely funny), Joyce Temple-Savage. Giving orders to staff to impress the undercover inspector by whatever means necessary, constantly calling a staff member Diego when his name is actually Ricky, and being generally slightly offensive to everyone around her. She may not have been the one to make all of the dirty jokes, but she was certainly the one who set things in motion to bring them about.

The second half of the show was much more music focussed than the first as it centred around karaoke in Neptuneâ€™s bar, including the wonderful Asa Elliott. The karaoke was â€˜interestingâ€™ to say the least, and even throughout the night of entertainment at Neptuneâ€™s there were still plenty of laughs to be had. The whole thing ended to a well earned standing ovation after a fantastic finale of Viva Espana, which definitely left me wanting to head to sunny Spain, and of course the whole crowd joined in.

Overall, I had an amazing night of fun in the sun, it was hilarious from the first line to the final bow.