Dear Zoo live on stage! Â will be coming to theatres in Bridlington, Rotherham, Harrogate and Wakefield this year. So Yorkshire Families will get to make the most of the classic children’s book live on stage.

As we’re so excited for the show (we’ll be heading to Theatre Royal Wakefield to see it), we wanted to share this rare interview with Dear Zoo Author Rod Campbell….Â 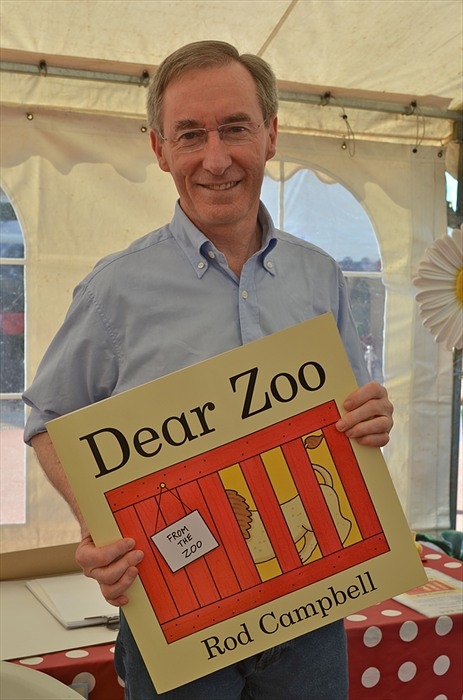 â€œI wrote to the zoo

to send me a pet.

However, it is my solemn duty to inform you that we were almost living in a world without Dear Zoo! Rod Campbellâ€™s immensely successful childrenâ€™s book, which has sold an eye-watering eight million copies in twenty different languages, nearly failed to see the light of day.

If that had happened, we would also have been deprived of the very exciting prospect of the first ever stage show of Dear Zoo. The bestselling book has been adapted by Rod into a play, entitled Dear Zoo Live on Stage, which is touring the country this spring â€“ more of which anon. 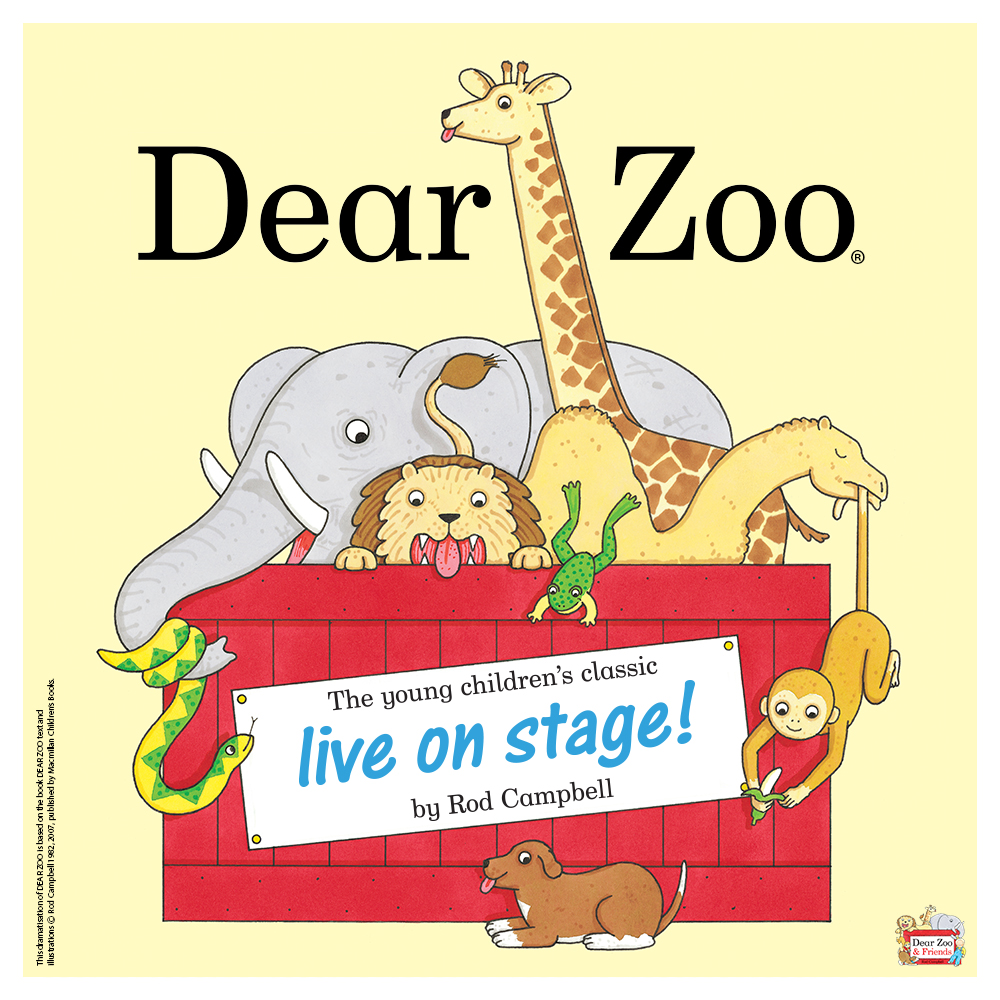 When we meet at his publishers, Macmillan Childrenâ€™s Books, Rod, who is as charming and as likeable as his most famous book, takes up the story. â€œWhen I was younger, I tried to make it as a painter.

â€œI had no money. I lived in friendsâ€™ attics, and moved ten times in eight years. I made ends meet by doing painting and decorating. It was like La Boheme.â€

For the decade before the bookâ€™s publication in 1982, Rod did a very passable impersonation of a starving artist. Determined to make it as a painter, he had no thought of being a childrenâ€™s author. 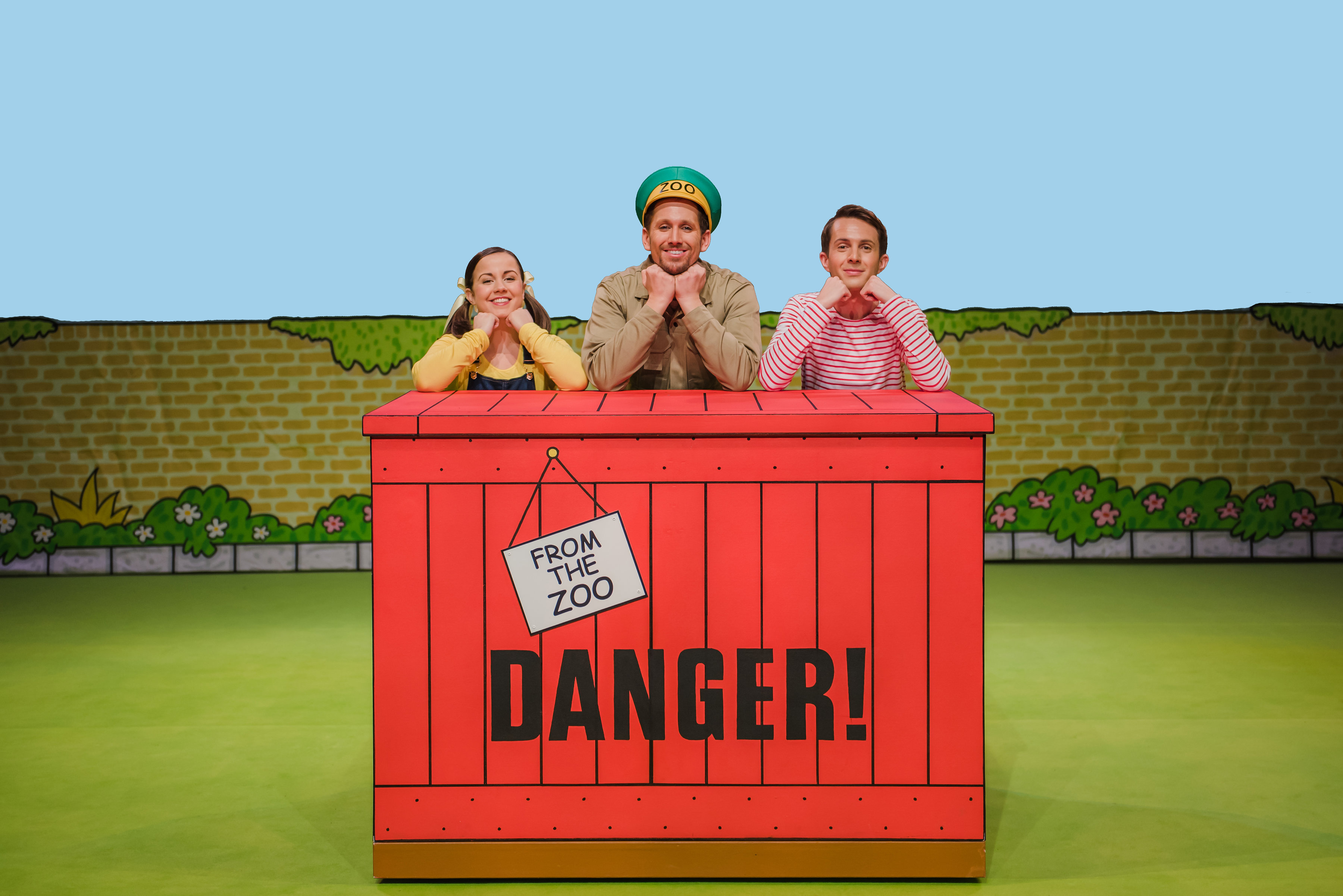 â€œThen someone whose sister worked at a childrenâ€™s publishing house saw some of my drawings. I was introduced to them and asked to illustrate some simple books for the under fives. This act of kindness started me on a career in childrenâ€™s books â€“ serendipity, one could say.â€

Thank goodness, indeed. Soon afterwards, the publishers Blackie expressed an interest in his work, and the rest is childrenâ€™s-book history. 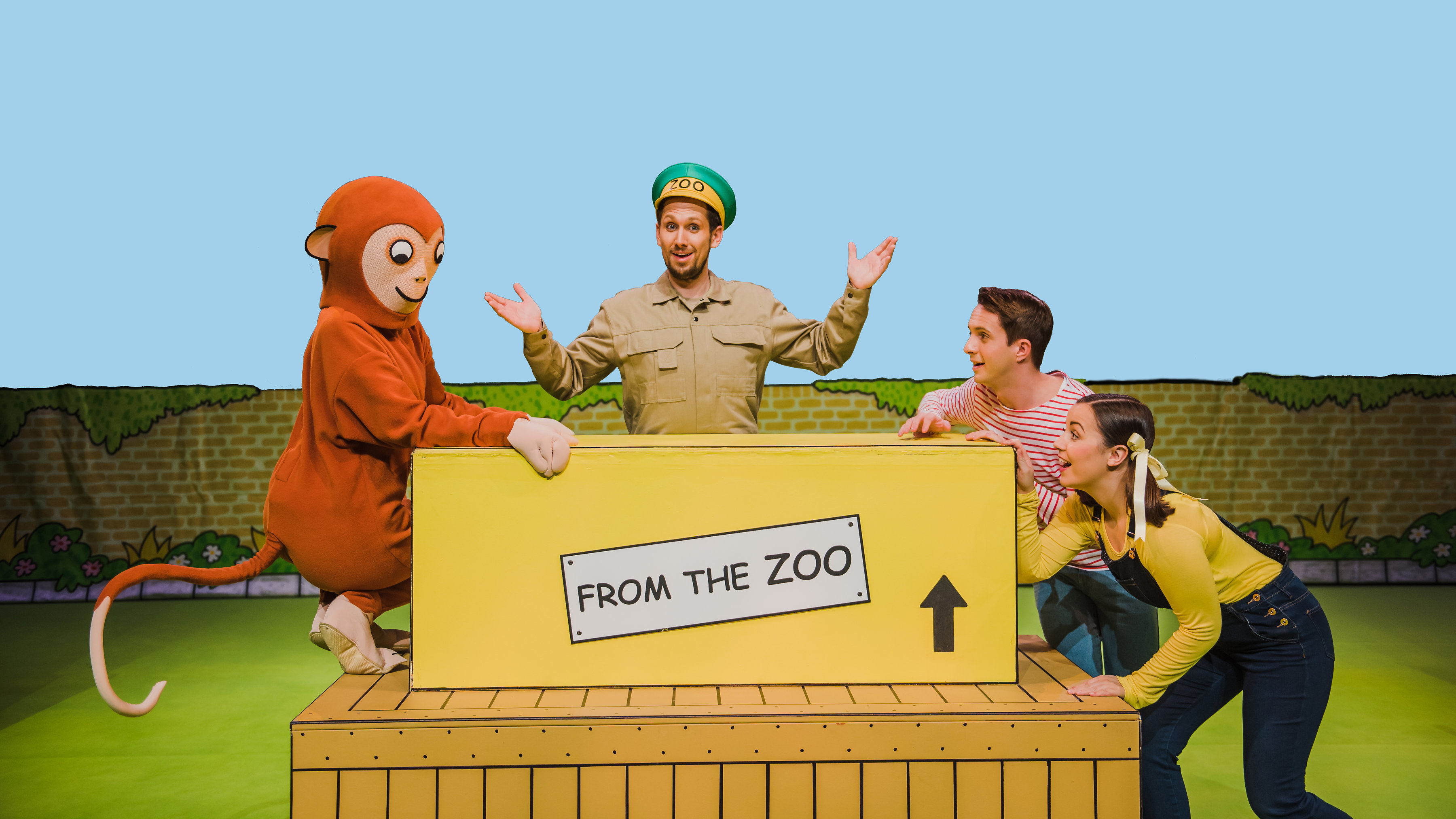 The delightful story of Dear Zoo â€“ in which a child writes to the zoo asking to be sent a pet â€“ has become a publishing phenomenon and celebrated its 35th anniversary in 2017 with a unique partnership with London Zoo.

Now, having established himself as one of the best-loved and most successful childrenâ€™s authors in the UK, at the age of 72 Rod is entering a brave new world.

Produced by Norwell Lapley Productions and directed by Michael Gattrell, Dear Zoo Live on Stage will appeal particularly to children aged between 2 and 6 years.

Realised through wonderfully child-engaging puppets, original music and lots of audience interaction, it will immediately attract families and children who are already fans of the book. But it will also act as a splendid introduction to those discovering the story for the first time.

The show which toured successfully in 2018 will be touring the country once again in 2019 tis spring, opening on Sunday 3 February at Shrewsburyâ€™s Theatre Severn. The tour features more than 72 scheduled dates around the UK, with more to come. Full details are available at www.dearzooandfriends.com/dear-zoo-live

Dear Zoo Live on Stage will bring the timeless magic of the book to life in an unforgettable way. Children â€“ and of course their parents â€“ will be able to experience the wonder of…

Rod has found the process of writing a play quite an eye-opener. He admits that the job of transferring his story to the stage was, at times, challenging.

But the author emerged from the process with a tremendous sense of pleasure at having mastered an entirely new skill. Rod declares that, â€œItâ€™s been a wonderful experience.

â€œI have really enjoyed solving problems, and itâ€™s been a great delight to learn something new. Iâ€™ve learned a whole new language, including phrases as simple as â€˜upstageâ€™ and â€˜downstageâ€™. When I wrote, â€˜exit stage leftâ€™, a frisson ran down my spine!â€

Above all, in creating the play, Rod was anxious to remain as faithful as possible to the essence of his widely adored book. To that end, Dear Zoo Live on Stage elicits the same excitement as the book.

The author explains that, â€œThe stage show will play on the thrill of opening the crates.â€

â€œChildren up to the age of six love the animals and they also love the guesswork â€“ â€˜Whatâ€™s in the box?â€™â€

It is that curiosity, Rod believes, which has ensured that the book has remained so popular. â€œChildren have a great curiosity about whatâ€™s behind the flap. They love to open the flaps again and again.

â€œOf course, they know whatâ€™s behind each one, but every time they approach it as though they donâ€™t. For every child each time is like the first time. The payoff in the play is that inside each crate is an animal that speaks.â€

â€œThe other thing children adore about Dear Zooâ€, Rod adds, is that, â€œAfter the first time, they know that the book is

completely safe. There is nothing in it that will bite them. So they can luxuriate in pretending to be scared by it.

â€œAnd of course, it ends with a puppy. That is the present at the end. Youâ€™ve gone through several unsuitable animals, and then you get to the perfect animal at the end. Itâ€™s a reward.â€

Rod is hopeful that audiences will leave the theatre having had a very happy experience at Dear Zoo Live on Stage and that the show will bring many children into the theatre for the first time.

Even today, 35 years after it was first published, people still rush up to tell Rod how much Dear Zoo means to them. The author says, â€œI remember one parent telling me, â€˜My 18-month-old daughter loves it. She walks around all the time with the book under her arm.â€™ Or they say, and this is the killer, â€˜My child loves this book â€“ and I loved it when I was a child, too.â€™ That sort of reaction is deeply touching and youâ€™re forced to think that Dear Zoo is something that connects.â€

So I think we can safely conclude that at least 8 million of us remain very grateful that three and a half decades ago, Rod chose to write books for young children over his love of fine art.

Full details about the Dear Zoo Live on Stage tour are available at www.dearzooandfriends.com/dear-zoo-live. 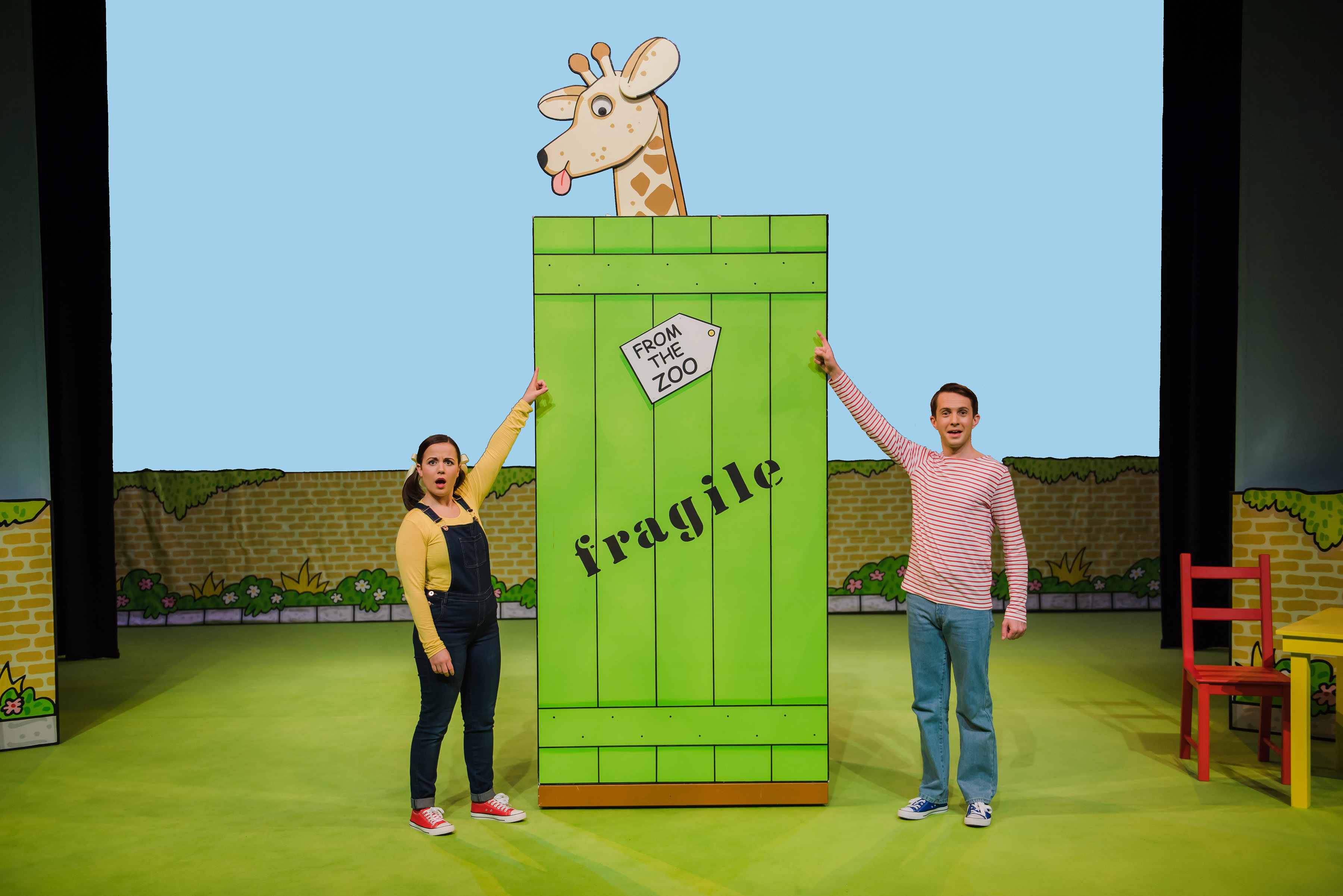 â€œIâ€™m absolutely delighted that Dear Zoo is being brought to life on stage for the very first time!â€ Rod Campbell, author and illustrator

Â  Dear Zoo live on stage!Â  will continue to delight audiences when it opens on 4 February at Shrewsburyâ€™s Theatre Severn.Â Â Â  With 73 scheduled dates around the UK, full details are available at: Â Â www.dearzooandfriends.com/dear–zoo-live

Celebrating 35 years in 2017, Dear Zoo, published by Macmillan Childrenâ€™s Books, the story of a child who writes to the zooasking them to send a pet, continues to delight each new generation of children as they lift the flaps in search of the perfect animal.

Rod Campbell is the master of interactive storytelling and an expert in early learning for pre-schoolers. As a trusted household name, his books have stood the test of time and continue to be a staple addition to the family bookshelf and a popular choice for early yearsâ€™ teachers. The creator of more than 200 books for children, Rod Campbellâ€™s unique ability to be both fun and reassuring encourages children to discover and delight in the world around them.

Commenting on Dear Zoo live on stage! Rod Campbell said â€œI can hardly believe that Dear Zoo has celebrated its 35th anniversary and I really am enormously touched and delighted that successive generations of young children continue to love Dear Zoo – their obvious pleasure when interacting with it is so gratifying to see, and for me is the very greatest of compliments!â€

** DISCLAIMER: WE WILL RECEIVE A FAMILY PASS TO SEE THE SHOW AND HAVE AGREED TO RUN THIS PREVIEW IN ADVANCE.**