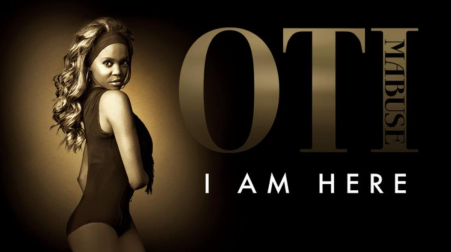 FINISHING AT THE LONDON COLISEUM IN JUNE 2022

TICKETS WERE ON SALE FROM 10AM ON FRIDAY 12TH JUNE VIA – www.otimabuse.com LINK TO TOUR ARTWORK AND IMAGES HERE

Strictly Come Dancing and The Greatest Dancer reigning champion Oti Mabuse has announced her first ever  UK tour. Starting on the 16th April 2022, the tour covers all corners of the UK, finishing at the iconic London  Coliseum in June. Tickets went on sale at 10am on the 12th April via www.otimabuse.com

I AM HERE which is (a direct translation of Oti’s name in the language Setswana, spoken in South Africa) is a fast celebration of the influences and inspirations that took her on a journey from growing up in South Africa to  following her dream. From mesmerising Jives and pumping Sambas to South African traditional dances, this is  an explosive night of dance and music that will set your heart racing. Oti will also be joined by some of the  world’s greatest dancers and the West End’s finest singers and musicians, for what is promised to be a night of  electrifying choreography and like nothing you’ve ever experienced before.

Oti says, “It’s like a dream come true to be announcing my first ever tour! Performing on stage is something I  feel so passionately about, and I can’t wait to get out on the road and share my story with you all”.

Eight-time South African Latin American Champion, Oti is regarded as one of the most successful South African  dancers in the world, regularly choreographing critically acclaimed musicals and is now a sought-after  presenter and judge on UK television.

As well as the incredibly successful ‘Home Festival’ that Oti has been busy curating with fellow Strictly pro Karen  Hauer over the last couple of months – bringing some much needed joy and dancing to living rooms across  globe during lockdown, Oti was also recently announced as the new presenter for hit CBeebies show Boogie  Beebies.

I AM HERE will see Oti give 50 performances during the tour, playing at the UK’s most prestigious venues.

12th May – Canterbury, The Marlowe Theatre +

13th May – Canterbury, The Marlowe Theatre *+

16th May – Newcastle-upon-Tyne, The Theatre Royal *+

21st May – Aberdeen, The Music Hall

22nd May – Glasgow, The SEC Armadillo

27th May – Dartford, The Orchard Theatre

Plus a special gala performance at the London Coliseum in June – sign up at otimabuse.com for  priority booking.