Fridayâ€™s headliners Ocean Colour Scene achieved both critical and public success in the 90s. The band released 5 top ten albums. One of which, Marchinâ€™ Already reached number one in 1997. The bandâ€™s biggest hits include The Riverboat Song and The Day We Caught The Train.Â

Continuing with the theme of Brit Pop icons, James Walsh of Star Sailor Fame will be appearing to play some stunning cuts from his recent album â€˜Tiger On The Bridgeâ€™ and more.Â

Giving some strong Yorkshire representation on Friday are Fling, an up and coming Bradford band who specialise in creating self described â€˜wonky popâ€™ tunes. Recently they signed to iconic Leeds label Dance To The Radio who are responsible for publishing work from bands including Forward Russia, Dead Naked Hippies and Grammatics.Â

Also performing on this day are Idles. Idles are at the epicentre of the punk revival that has taken the industry by storm recently and sold out an entire UK tour last autumn off the back of their album Joy as an Act of Resistance.Â Â

Saturday provides a compelling mix of established and emerging indie acts. After taking a long hiatus from 2010 till late 2018, Doves are well and truly back. The band are responsible for brilliant tracks including Black & White Town and There Goes The Fear Again.Â

The second day of the festival includes performances from Tom Grennan, Circa Waves, Anteros, The Blinders and more. Tom Grennan has managed to gain a legion of fans, release some fantastic tracks such as â€˜Royal Highnessâ€™ and â€˜Soberâ€™ and even bag a world record for performing the most gigs in 12 hours.Â

Circa Waves, one of the newly announced acts are one of the UKâ€™s best loved indie acts. Their sunny indie first caught peopleâ€™s attention back in 2015 with their debut album Young Chasers.Â 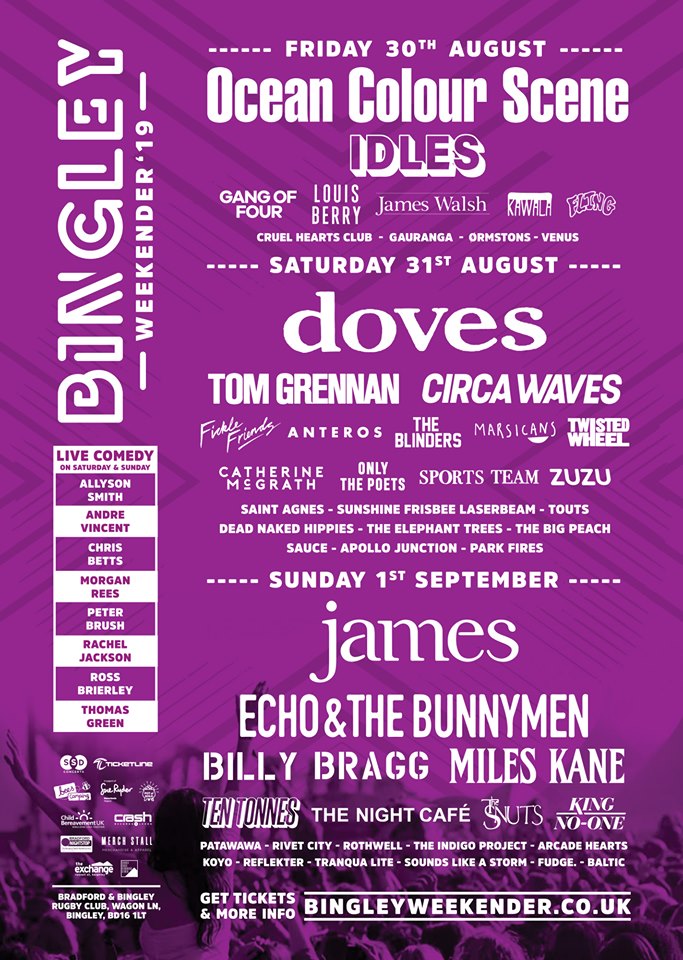 Doncaster band The Blinders have quickly risen to the top of the indie pile for their political lyrics and wild live shows. Their dystopian debut record â€˜Columbiaâ€™ is a strong statement of intent.Â

Another Yorkshire band playing who will need little introduction are Leeds natives Marsicans who the national music press canâ€™t get enough of.Â

Sunday 1st September at Bingley Weekender has a billing of epic proportions. Headliners James are regarded as one of the prolific bands that arose from the Madchester scene. Their discography includes tracks such as Sit Down and Laid.Â

In addition, Sunday includes performances from iconic British acts Miles Kane and Billy Bragg. Bookings including The Night Cafe, The Snuts, Ten Tonnes and local lads The Indigo Project ensure that festival goers get to see some of the next generation of up-and-coming bands.Â

Although music is the primary focus of the fantastic new festival, there is so much more to Bingley Weekender. The boutique, family friendly festival will include street art, comedy, great food and opportunities to camp/ glamp depending on your preferences.Â

Although there are no more early bird tickets left, a limited number or tier one tickets are now on sale for adults and children.Â

For tickets and more information head to: https://www.bingleyweekender.co.uk